Our Company offer 360° Film Production and location services all around Morocco from the northern Mediterranean coast to the Atlantic sea passing by the Atlas Mountains, forest and the limitless southern desert.

Filming in Morocco necessitate an official film permit delivered by the CCM: Moroccan Centre for Cinematography.
In order to obtain a permit, the international film production company must hire a local production company. Once both companies sign the accreditation letter a film permit can be issued.
Some extra licenses are necessary for: special locations shoot such as museums, governments buildings, military equipment use, airports, highways, drone use, shipping material… but can be obtained upon request.
Please note that Moroccan government officials and the CCM make all filming procedures very easy and facilitate any procedure that the foreign filmmaker would require to accomplish his project as wishes. 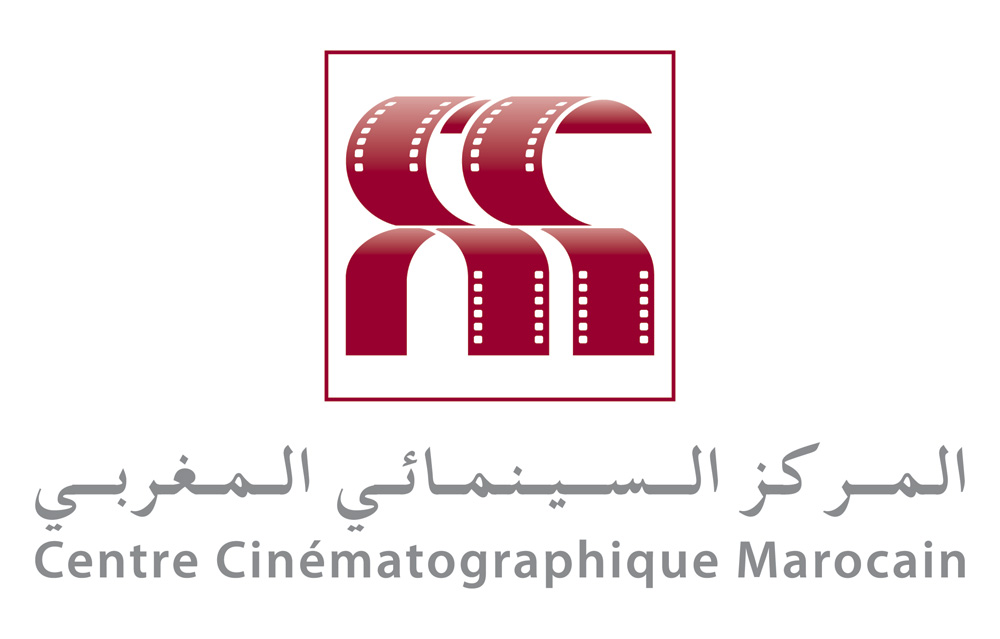 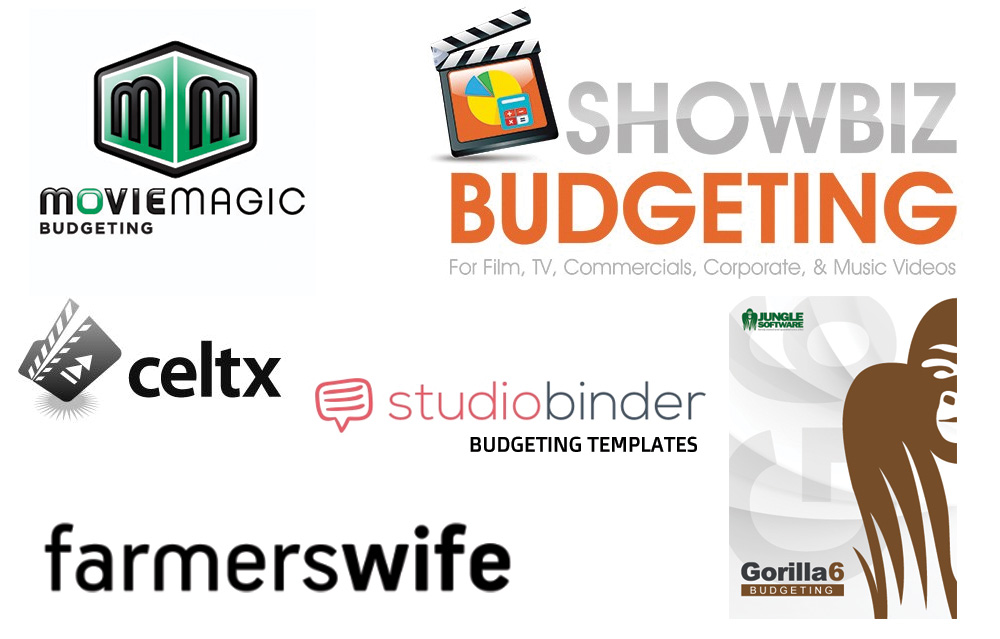 After a technical site inspection and once the script details are finalized Every film budget is made transparently and cautiously by our production accountant and line producer including all the services agreed on (no hidden costs). Extra services might be added once a written request and agreement from the foreign film company to the line producer is made officially.
The budget is always based on the weeks of prep, shooting and post production services. 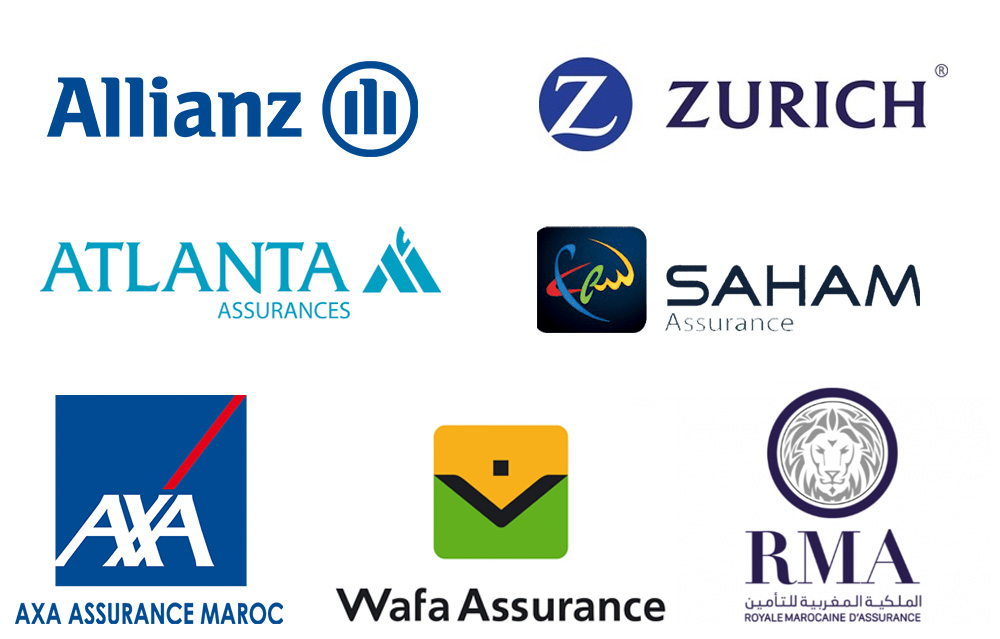 Our legal department would assist you and advise you getting an insurance policy from the international insurance firms headquartered in Marrakech and Casablanca.
All film production projects taking place in Morocco shall be covered by a local liability insurance. Foreign insurance can be added to supplement the Moroccan one.
All local film crew must be insured by worker’s compensation protection by Golden Palms Films, foreign crew shall be covered by the international production company.

Our in-house health and safety director (former Army Colonel emergency doctor) and his team have a long experience in handling health and safety threats in addition to risks in any work place or environment.
They work around the clock ensuring the well-being of all film crew on the set – studio – hotels and all over the country from their arrival until their departure.
Post production - during shoot: our Physician can assist any crew who have health issues and maybe need follow up in local clinics while working in morocco; in addition, they make the liaison with the base camp caterer chefs or hotels chefs for food allergies requirements per crew member.
Our health & safety department can adapt and work in collaboration with any international insurance requirements or their agents directedly on the ground in order to accomplish any film project the safest way possible.
Our department is combined of various team: (former police special agents, film set emergency doctor, film nurses, catering hygiene supervisor even local official government cops for celebrities’ protection if needed), conclusion we have a great team of professionals that can covers all safety matters from first aid to set and food supervision warranting the film project is legally compliant with all health and security regulation. 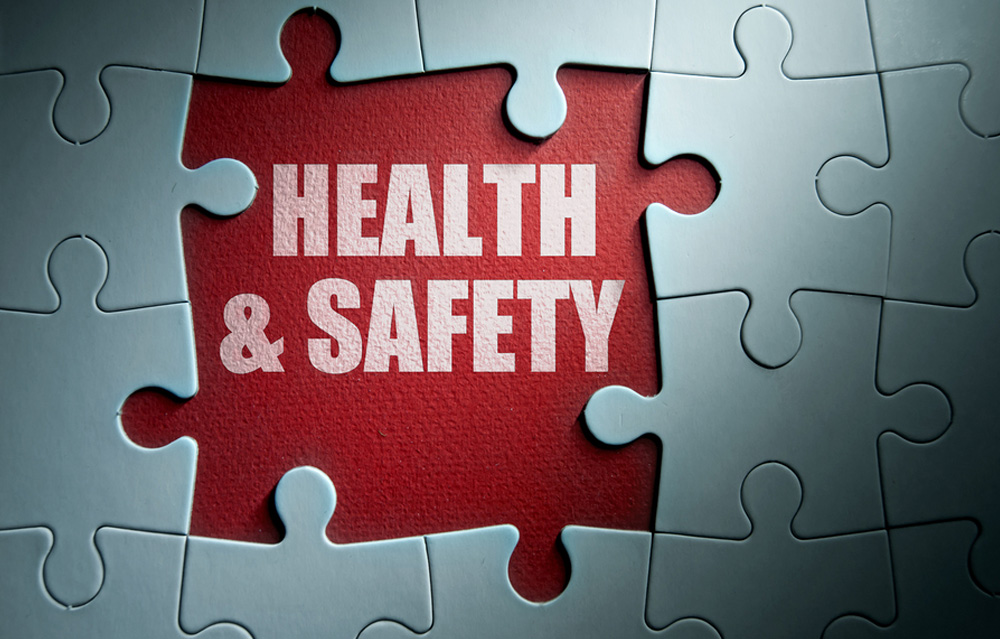 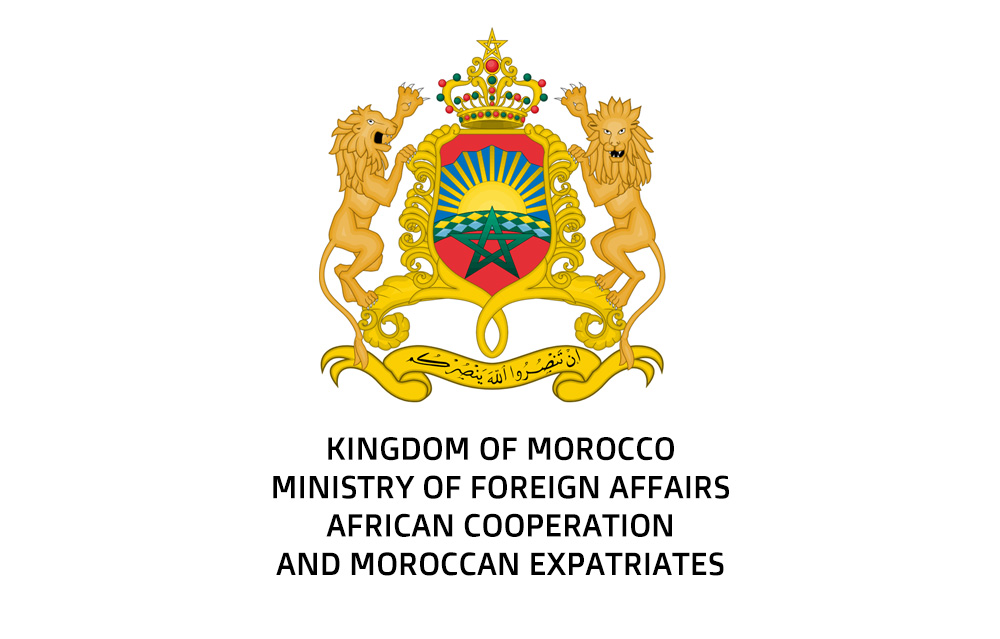 Normally most of the European countries as well as USA and Canadian citizens film crew don’t need a work permit or visa to work in Morocco however their stay must not exceed 90 days but if they do, a special immigration procedure must be applied.
Nationals of some countries who require a visa for Morocco will be automatically assisted
by the production assistant to gather all necessary document to obtain a valid visa.
All passports must be valid 6 months from trip day in order to enter the country.

Morocco is a very welcoming friendly country and its economy is mainly based on tourism, there are a large selection of international and local hotel brands as well as private guests’ houses for every budget and city.
At Golden Palms Films we have a travel agent that works around the clock to make the essential travel arrangement for film crew and casts.
As our sister company Golden Palm Strip is Moroccan official licensed travel agency means we guaranty you Morocco hotels most competitive rates and deals besides flexibility to use their facilities: offices - conference centers - spa …free of charge. 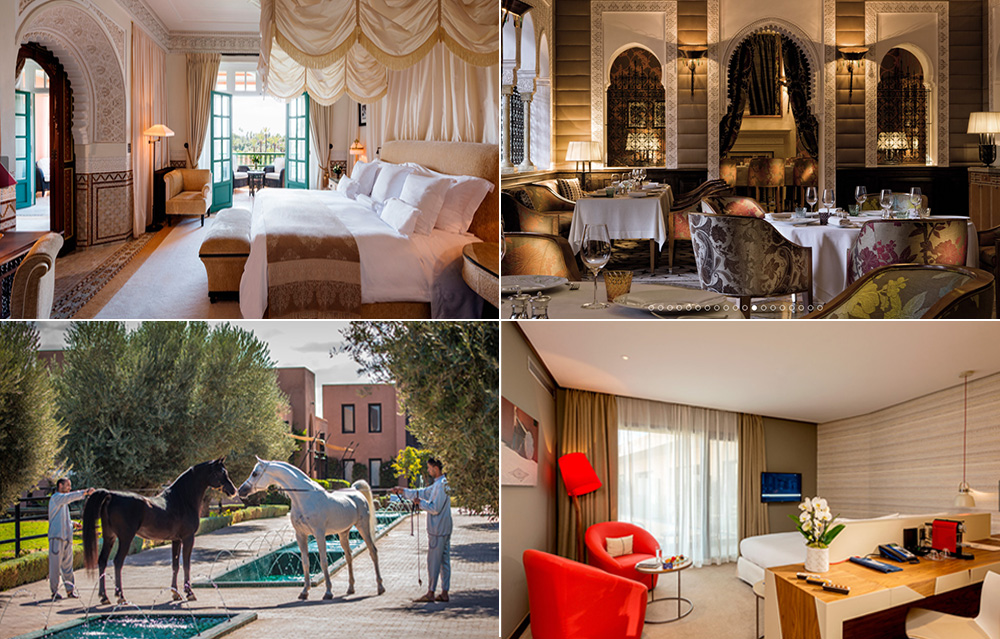 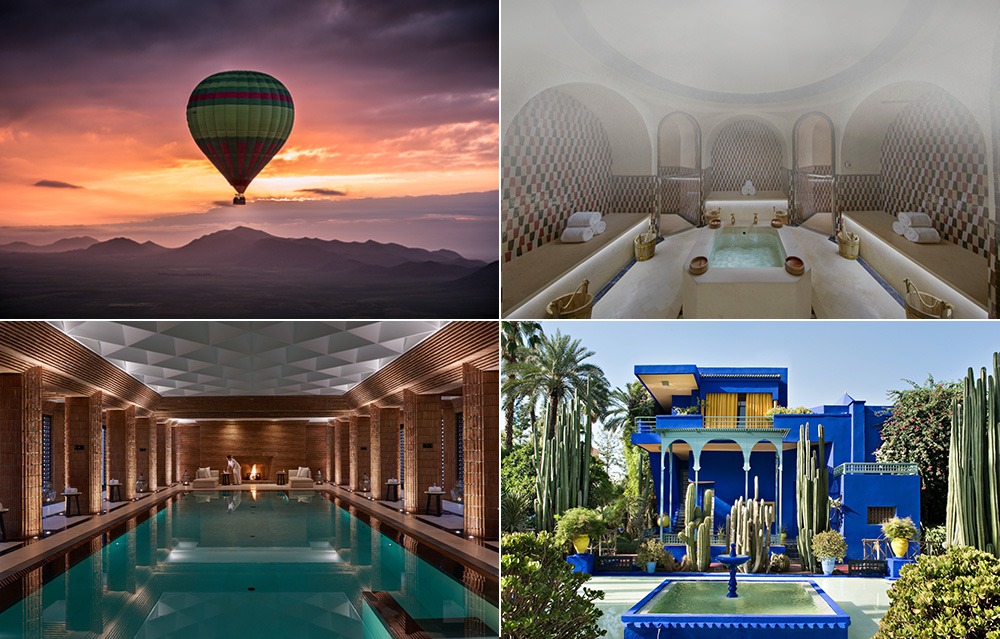 Our onsite production travel and concierge agents would handle all special requests for the film celebrities discreetly, same for film crew, providing the best recommendations in Marrakech or Morocco; from local and international cuisine experience or special tours booking in addition to spa and well-being activities, shopping, and many more surprises.

Golden Palms Films location department have an exclusive inhouse database of available up to date film locations (over 18 years of scout photography) for your all feature film, commercial, documentary, television series, tv reality show or photo shoots needs.
Our Location manager have a local filming knowledge and the right connections to secure you accessible shooting low-priced locations with short travel time all over Morocco: From busy downtowns to entire villages – old medieval towns or the infinite Sahara landscape.
Morocco in one of the most diverse and unique shoot locations in the world for filmmakers.
As the country is only 9 Miles below Spain and located in the top north west Africa with a Mediterranean and Atlantic coast length of 3500 Km, natural panoramas and textures: Sand – rock deserts - Sahara, canyons, forests, lakes, rivers, mountains, beaches by deserts, forests, Rocky Mountains, all of that makes it a colorful exceptional hub for any cinematography needs necessities in one spot that has the longest sun shinny days all over the year.
Around Morocco there are an infinite selection of modern, colonial and medieval architectures that dates from the 3rd century to the futuristics constructions that symbolize the people and the cultures who lived in that land.
Almost all cities have a mix of sites: palaces, building, kasbah, offices, houses, downtowns, villages, souks, medina, palm groove, gardens, historic sites & monuments, old - new airports, military bases, prisons, hospitals, highways, beach roads, off road, curvy mountains roads, golf courses… and of course a selection of film studios-built sets from pervious movies that can be used within their existing decors or wares houses that can be used as private studios.
Conclusion any TVC production or series shoot needs can finds its perfect filming shell in Morocco. 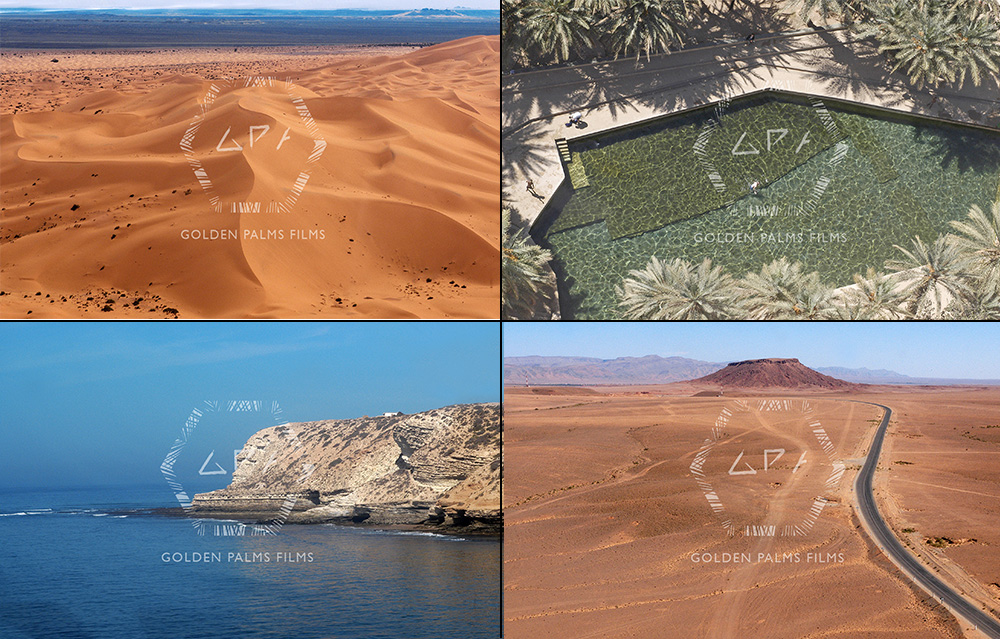 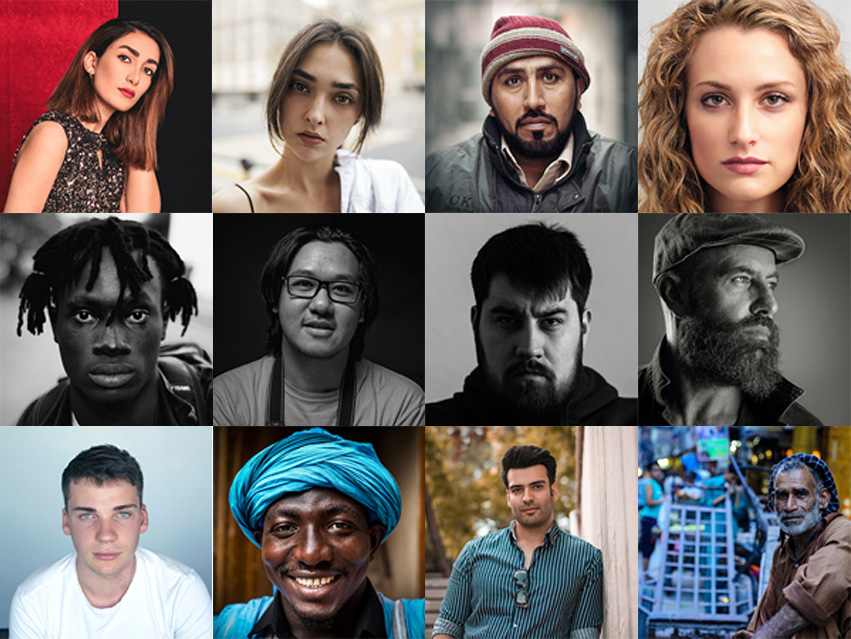 Our casting department have a data base that can covers all your talents, models and actors needs from any age or look.
Morocco is the only country in Africa and middle east that have a wide diversity casting with a long expertise in the international film production.
Morocco residents looks and appearances changes from region to another so you will have middle eastern looking casts - white – black - Latin – metisse all Moroccans, as well as big choice of internationals community living in morocco and work in the film industry: African, European, Asian…
Our casting director work closely with the film director or producer to suggest ideal artists and covering all matters related to interview, auditions, contracting.
Working time per day is 10 hours/ 6 days a week excluding travel and meal time. 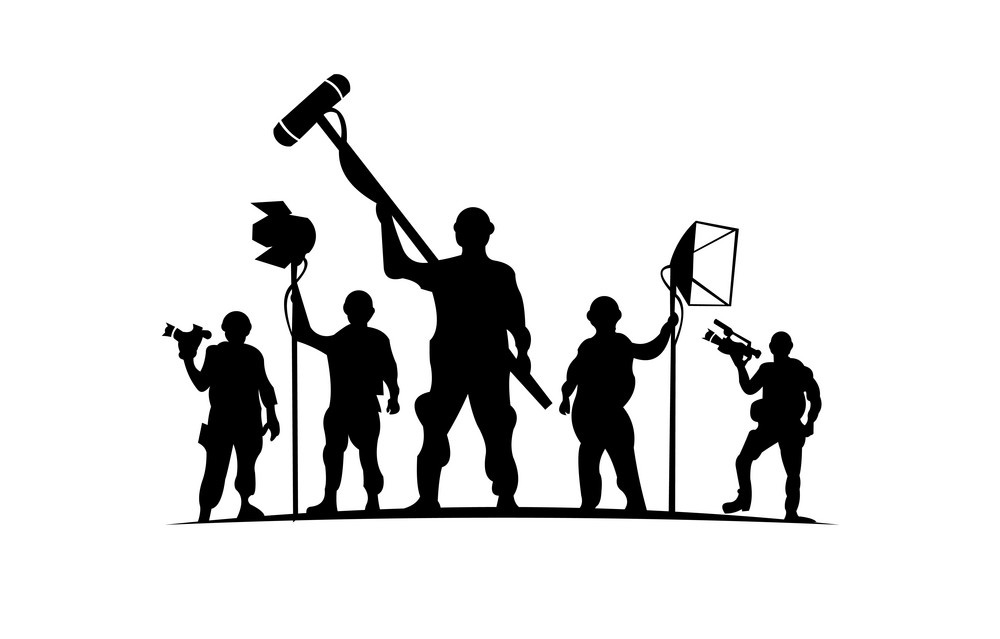 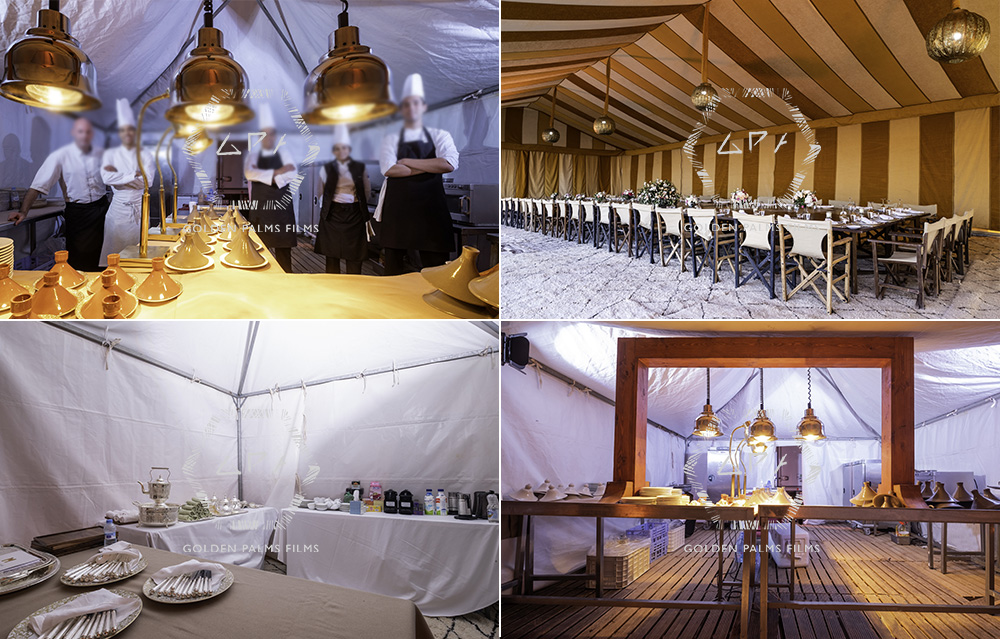 As Morocco is known for its hospitality and the diversity of bio sea and land products that’s why our catering department can guaranty daily food and beverages satisfaction to any need or taste of all film crew from morning until late night if necessary.
Our Chefs are flexible and would always prepare special meals for any film crew who might have food allergies or restrictions.
Depend on the size of the project, we normally use food truck as kitchens for small projects with medium size tents, but for big productions we set up full equipped marquee of any size supervised full time by a professional food and hygiene managers making sure that all necessary food health and safety measures are respected.

Whether you looking for a professional hair and make-up or prosthetics artists or simply assistants, we can hire you any small or big team for your feature film, commercial, or documentary needs.
Hair and make-up trucks as well as products are available on demand. 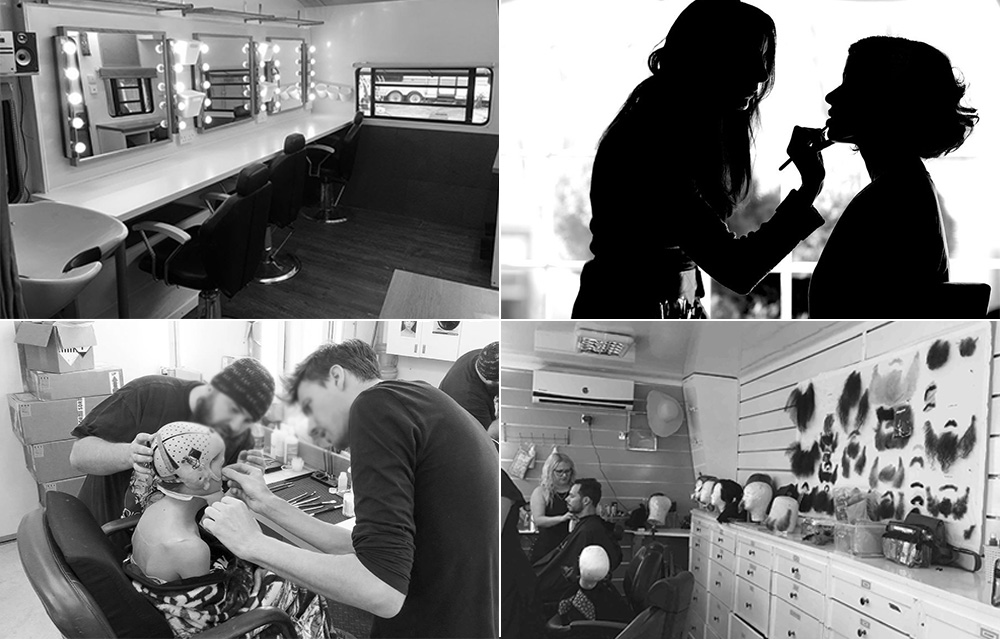 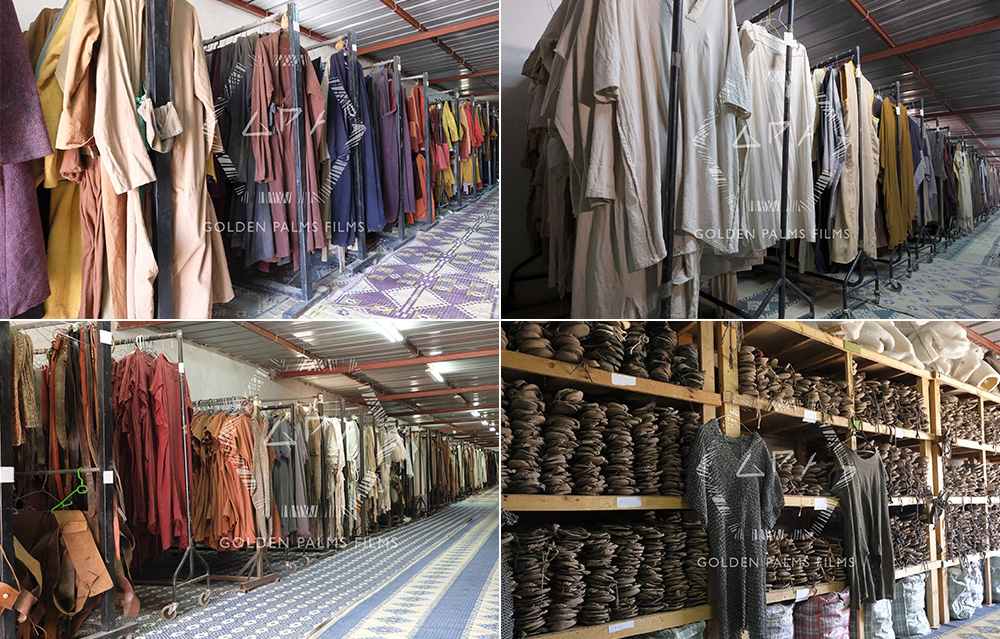 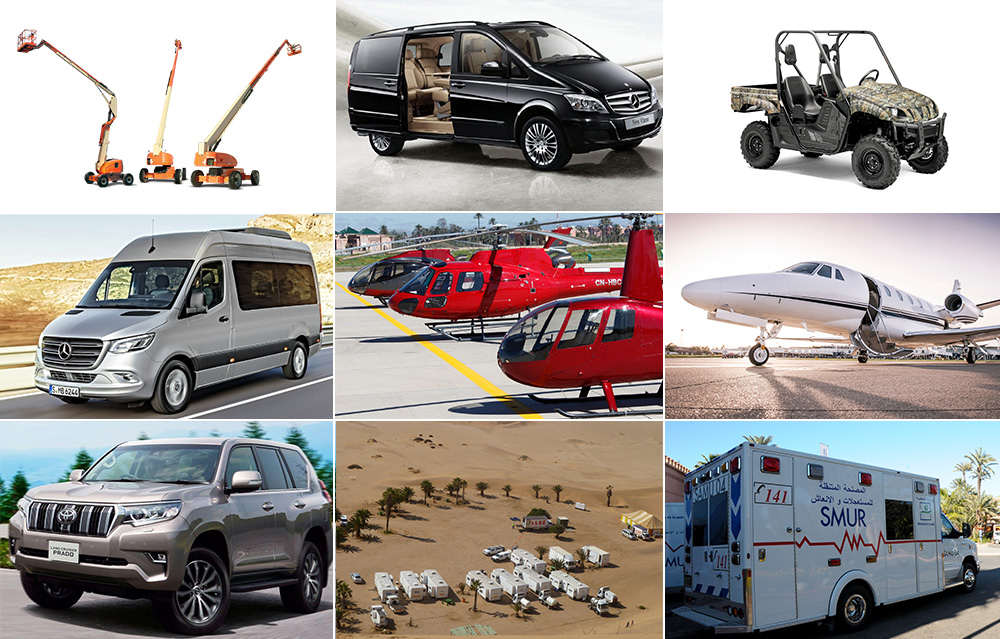 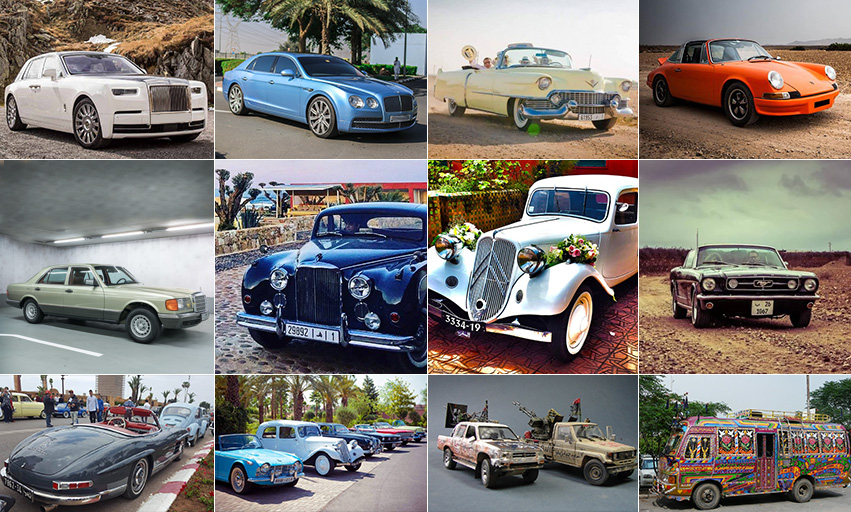 Our Picture Car department provide full range of action vehicles to film, television and commercial production taking place in Marrakech or all over Morocco.
Our action vehicle department coordinator and his team have a deep knowledge of any production needs and necessities.
The picture car team is composed of film crew professionals who can manage any fleet coordination, mechanics and operations, starting from hiring vehicles and preparing them for your set with any requirement that might be suggested (glass replacement for stunts scene…) to styling or tuning them at your requests (including military equipment).

International film productions crew are allowed to bring or ship their own film equipment and material through sea, land and air borders with a valid ATA carnet joined with the Moroccan film permit delivered from the CCM. (non-consumables items need a special license and duties shall be paid for them)
Our broker agents will assist the entry or export of your materials and film equipment to Morocco through:
Air: From major International Airports: Casablanca, Rabat, Tangier, Agadir, Marrakech, Ouarzazate for CARGO. Sea: Through Ports: Casablanca, Tangier Med for containers, Land: Tangier Med or Tangier downtown for trucks and other vehicles crossing the strait of Gibraltar from Europe (Algeciras or Tarifa/ Spain). In order to bring or transport Hazardous material in and around Morocco a MSDS (Material Safety Data Sheet) is required and sometimes an extra special authorization depending on the nature of the product. 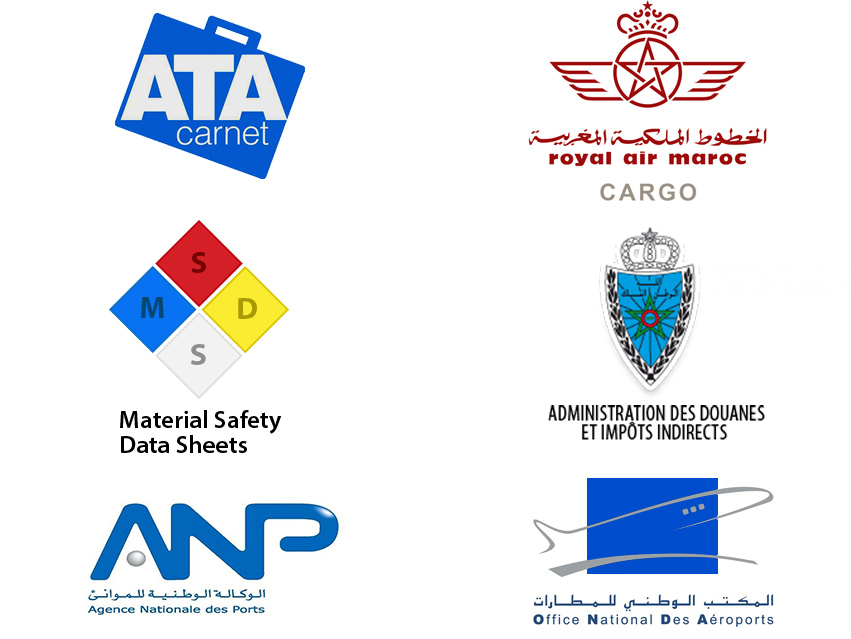 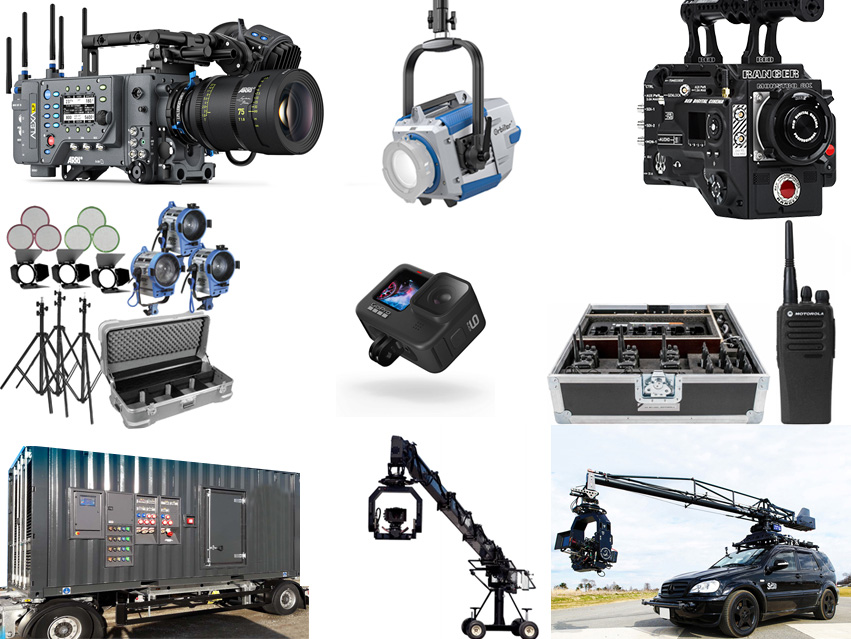 If your script requires a military equipment of any scale or number such as: combat vehicles, helicopters, fighter jets, boats… our production agents can get it for you by applying for a special permit to rent all the available equipment from the Moroccan royal armed forces.
Our team can also assist you to import or export all film necessary fire arms, knives, and ammunition through a special process supervised the local authorities full time once the special military permit is obtained.
Foreign shipping broker must have a permit to send weapons to Morocco. 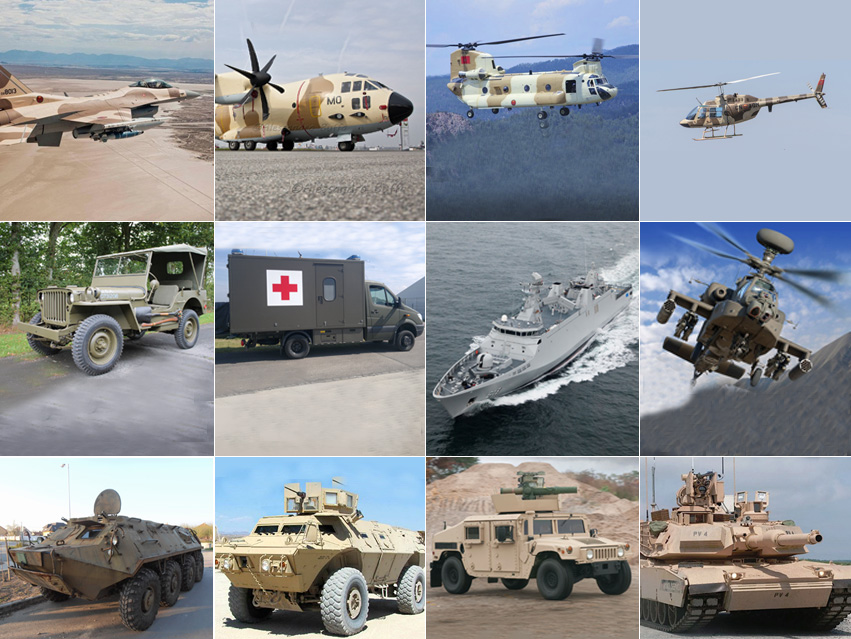 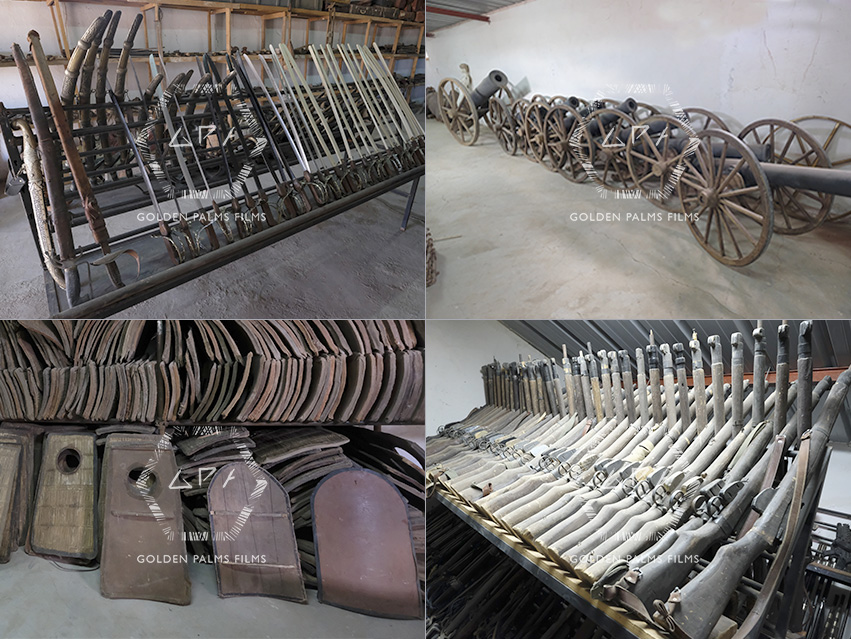 Either your film requires a horse, car, motorcycle stunt or a double stunt we can provide you with the right stunt for the assigned task. 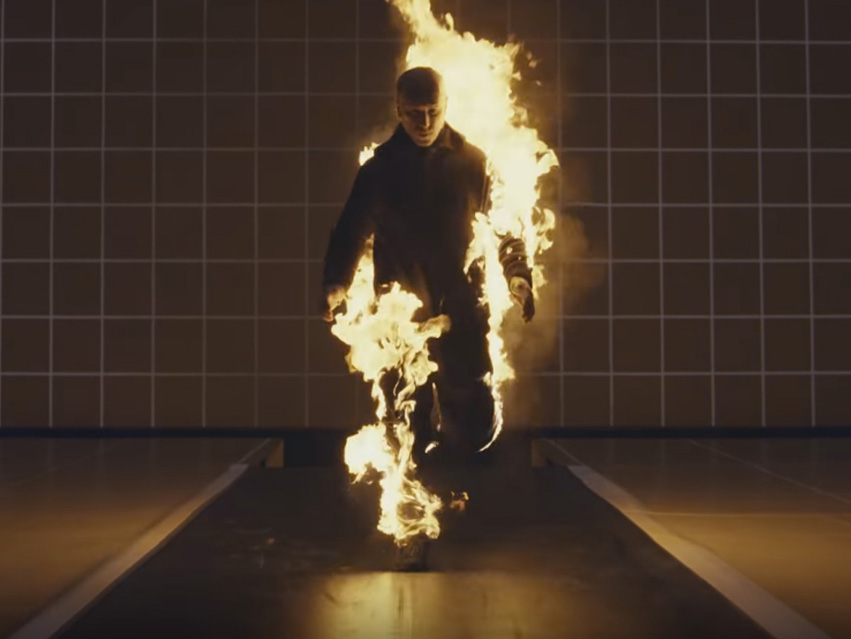 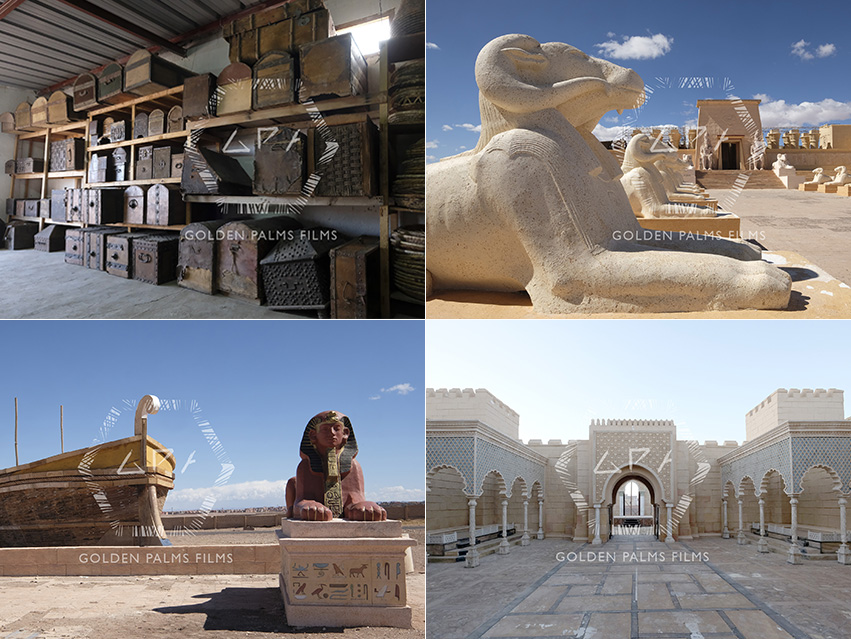 Golden Palms Films art director have a background of 26 years’ experience designing for Hollywood greats feature films and series sets all over Morocco and internationally.
We put at your disposal a Seamless: set-deco, props, greens, construction and decoration team that respect the deadlines and budgets. 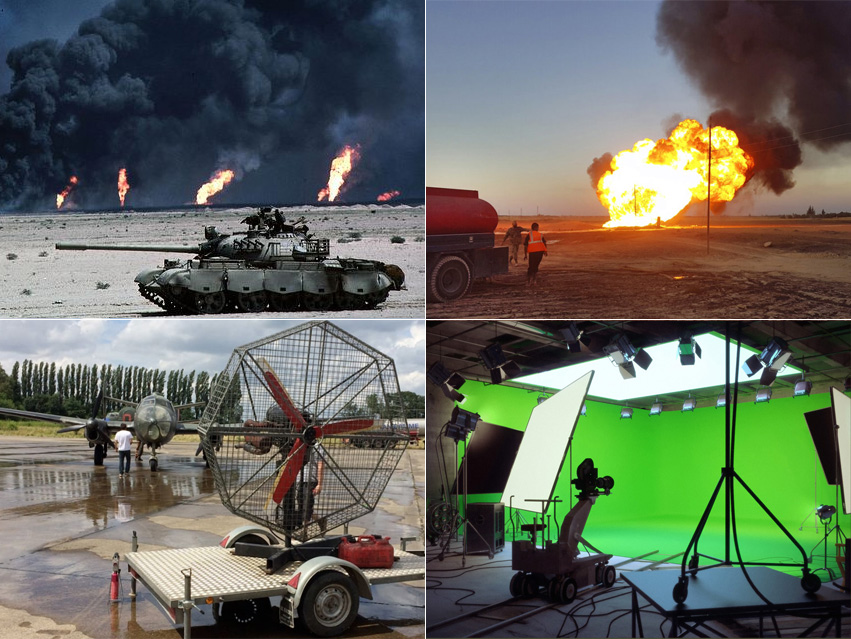 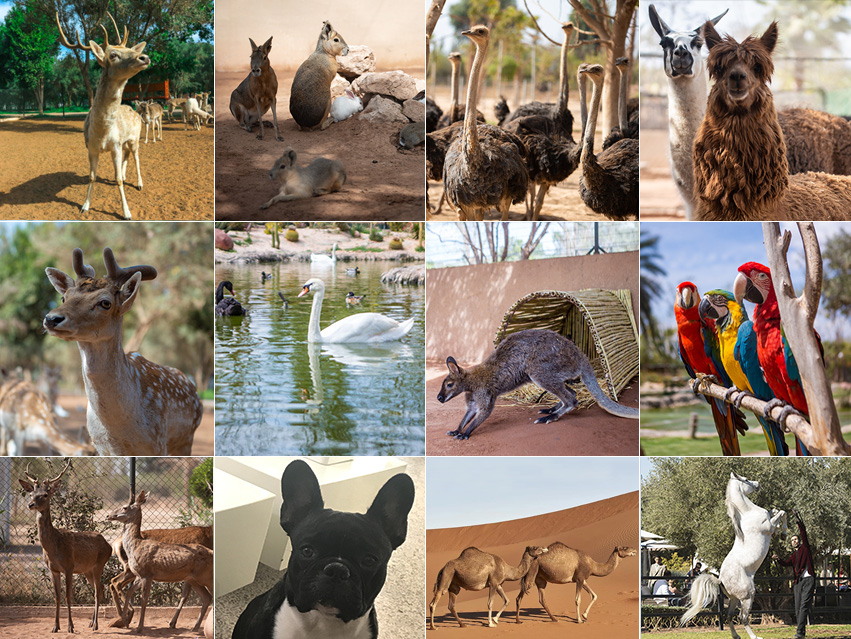 Providing animals for films shoot must occur within international protocols for animals’ health and safety; that’s why our animal department work only with a partner company that provides animals safe use in filmed media assisted full time by veterinary if necessary.
Available animals: horses, camels, dogs, cats + a Private zoo.

Open chat
1
Need help?
Hello!
Can we help you?